My interest peaked usually for the ones with appealing box art, I was a big sucker for cover art.

I was visiting a local science fiction convention. I found myself alone at one point browsing a section with loads of dvds lying around.

One cover art caught my attention. It was a dark picture with a tall building with neon signs in a very surreal perspective but quite pleasing mix of colors. It was hard to see what the movie was about but before I had too much to think about the shop owner approached me and said.

I like to remember that it was a guy with dorky glasses but I mostly remember wrong, but what I do remember is what he said.

“If you buy that movie, it will change your life”

Not that I believed what the shopowner said, but I saw the price tag being 49 KR (5$) I thought sure, It was worth spending that price even if it would be a total ripoff. Going home empty handed from a science ficiton convention just didn’t feel right anyway so might aswell buy a cheap movie. 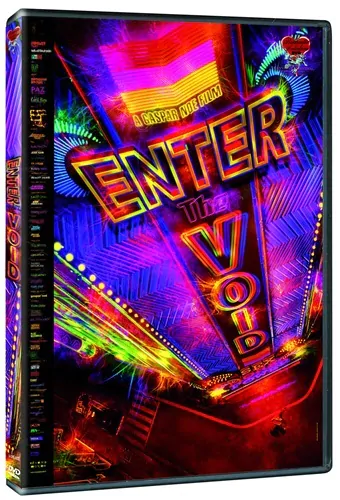 So I bought the movie and most likely I decided to give it a watch the same evening.

I started the movie late at evening

I don’t want to review the movie but rather tell what it made interesting.
It takes place sort of inside and sometimes outside the main character that does not seem to have had a easy past.

The movie is more ambient visuals than having an intriguing story, I would compare it to other movies like 2001 A space odessey which story progression is all over the place. It’s just something completely different than what you normally see.

It certainly has stuck to me so in a way it has altered my life in the future.

I think when working on Everhood I have been thinking about this movie quite a lot. When we first made the demo I had a unique theme I was going for and when we decided to make the full game I obviously realized that the story has to go somewhere, I don’t want to be completely random and then just end, that would just be boring and everything would just lose its meaning. There must be something.

It's far from what Everhood is but if you are interested to see where my mind about I recommend giving Enter The Void a watch.