ATM machine Post-Mortem and some thoughts before deciding what to include in the game. 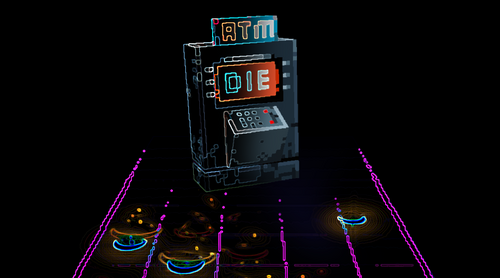 One of our discord members (Elin) said that she wanted to know more about why we chose the ATM machine as a battle in Everhood.

So here we are! Let's see why and how the ATM was done, this will also give a little insight into how my disturbed mind works. First I would like to explain more about the general process of the vertical slice.

That only battle was going to be the Red tie battle (also known as clubber battle in code). But, as we started working with the tools, it became apparent that this wouldn’t give the feels we were looking for in such a short session, it would just be a new battle system and we weren’t sure that this would convey the other parts of the game. 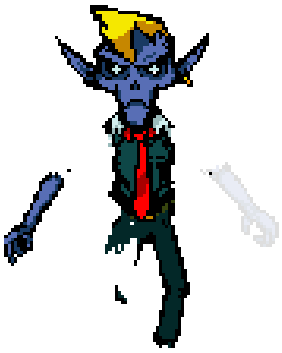 So, we decided to make another battle, a tutorial battle, because it was so easy and fun to make battle content anyway, especially with no new note mechanics.

The absolute first design of the game was supposed to be in an innercity during a winter scene and would lead the player straight into the nightclub (those assets were so early that they are already gone). The tutorial fight was going to take place on the corner of the street to battle an aggressive homeless weirdo, but that idea felt just awful, beating a trash living-homeless person as a tutorial is...Ehm.So,here come the Atm machine !

So, yes,the trash living-homeless person  turned into an ATM machine, which also made sense that players could repeat the battle afterward (like a good tutorial!). Why the atm machine is 3D compared to most other battles was mainly because it was faster to make than to do a bunch of sprites and animate them.

But making him 3D was also a bonus to his character. I like to think that the ATM machine has reached another state of consciousness so he can perceive three dimensions and he can see himself as 3D as most characters can only view the world in 2-dimensional space, more on that possibility in the full game! HEHE

The tutorial battle was supposed to be the ATM machine, but when I was looking for what battle music would fit (within my own library), I felt that ATM machine is a soul-sucking money devil and he shouldn’t give off any nice vibes at all, similar to real life ATM machines. Having this as a tutorial wouldn’t feel that welcoming for players, it’s already a weird experience, and having everything try to kill your immediately just felt a bit too violent for a lack of better words.

But, thanks to Jordi’s implementation of the battle systems, I was able to make yet another battle easily without a lot of extra work. This time, I wouldn’t start with what fitted into the world but I would think of what is the best way to describe our gameplay. So I made a song solely to fit into the tutorial, which became the Frog battle.

The whole environment outside the frog battle was pretty much built for to make a nice tutorial without feeling there was too much handholding, just half-cryptic signs to show controllers. As usual, I tend to go a bit out of subject, but I imagine those anecdotes is what makes Everhood and game development interesting.

I enjoyed writing this little piece, I might possibly do another vertical slice post-mortem.Thanks for reading,stay tuned! :D